Kyla is the owner and founder of Nutritional Revolution, a company where she specializes in sports nutrition and sex differences in sport with Pro to amateur level athletes.

Coffee, and the caffeine that’s in it, most of us love it!  Some of us even feel like we NEED it!  And others might get the jitters, racing heart, and have trouble sleeping.  But did you know the genetics that you got from mom and dad might be able to tell you how much caffeine you should be consuming for health and athletic performance?

How Can My Genetics Tell Me How Much Coffee I Should Drink?

You may have heard someone say “Caffeine has no effect on me, I’m a fast metabolizer”, well they’re sort of onto something here.

Within your liver, you have an enzyme called Cytochrome P 450 and is controlled by one of your genes called CYP1A2.  CytochromeP450 aids in the metabolism of caffeine as well as many medications and drugs from your system.  The activity of this enzyme will determine how quickly you process those drugs and caffeine from your system.  There are 3 types of CYPA1A2 gene mutations in our human population, of which, you will have one.  If you are A/A homozygous at the CYP1A2 gene you would be considered a fast metabolizer of certain drugs as well as caffeine.  If you are heterozygous, A/C at the CYP1A2 gene you would be considered “wild type”, what the general population carries, and a normal metabolizer.  Finally, if you are homozygous C/C then you would be considered a slow metabolizer of caffeine and certain medications (Caterina, Martinez, & Kohlmeier, 2019).

Now the only way to know this is via genome sequencing through a company such as 23&Me for example.  And, no, being able to fall asleep after drinking coffee actually does not mean you are a fast caffeine metabolizer and may in fact mean you are a SLOW metabolizer because it takes longer for its effects to hit you, hence being able to fall right asleep after consuming. 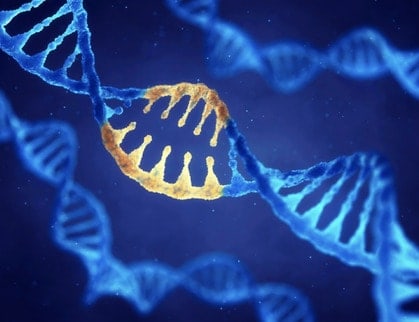 What Does the Research Have to Say About This for Heart Health?

Many of us consume caffeine for its effects on stimulating our central nervous system for focus or performance while dampening the feelings of fatigue.  Caffeine does this by acting as an antagonist on our adenosine receptors in the brain.  But caffeine can also cause anxiety, alter blood pressure, arrhythmias, and affect cardiovascular health in some (Caterina et. al., 2019).

Until now, a lot of the research has been back and forth, and probably a bit confusing to the public, one study will show caffeine consumption improves cardiovascular health and performance in sport while another shows the opposite or no effect.  The reason for this is that these studies did not take into consideration each participant’s CYP1A2 gene mutation.  Now we know that plays a large role in determining, not only your performance in sport but, your incidence of cardiovascular events.

These differences in genetics between individuals could be responsible for individuals’ different reactions to caffeine.  Interestingly enough when we differentiate the study participants by gene mutation and caffeine intake we see that those who are slow caffeine metabolizers (homozygous C/C) and consume large amounts of caffeine increase their risk of hypertension, nonfatal myocardial infarction, and impaired fasting blood glucose compared to the fast metabolizers (homozygous A/A) who consumed the same amount of caffeine.  The fast metabolizers who consumed high levels of caffeine actually saw the opposite effects, a decrease in risk of hypertension, impaired fasting blood glucose, and nonfatal myocardial infarctions when they consumed greater than 200mg caffeine per day (Caterina et. al., 2019).  It appears that those who carry the alleles for fast caffeine metabolism may benefit from high caffeine consumption whereas, for those with the alleles for slow caffeine metabolism, caffeine intake can be detrimental to their health.  The suggested intake of coffee for slow caffeine metabolizers is to keep it to one cup per day or no more than 200mg caffeine per day (Caterina et. al., 2019).

What Does the Research Say for Athletic Performance?

When we look at genetics, caffeine intake, and how that plays into athletic performance as an ergogenic aid we see a pattern in the research here as well.  In a recent split-plot randomized, double-blinded placebo-controlled study released in 2018, the researchers took 101 trained male athletes, genotyped them all, and had them perform a 10-km time trial (TT) on a stationary bike after consuming either 0mg caffeine, 2mg/kg, or 4mg/kg in the 60-minutes prior.  The results showed a significant gene-caffeine interaction, specifically in the homozygous A/A carriers (fast metabolizers) when they consumed 4mg caffeine/kg BW pre 10-km TT they saw a 6.8% improvement in cycling performance.  They also noted that those with homozygous C/C allele (slow metabolizers) saw a 13.7% decline in performance when they consumed 4mg caffeine/kg BW prior to the cycling TT.  The study noted no significant effects with those carrying the A/C alleles (Guest, Corey, Vescovi, & El-Sohemy, 2018).

Many may be aware of the anxiety that comes with too much coffee.  The anxiety that specifically comes post caffeine intake has to do with another one of our gene mutations called ADORA2A.  If one is homozygous T/T it is suggested to avoid acute caffeine consumption equivalent to two espresso shots or greater.  This can be helpful to be aware of for athletes who may get nervous or anxiety pre-competition or racing.  Lastly, it has been noted with the ADORA2A mutation individuals experience an increase in sleep disturbances in the evenings following days of caffeine consumption which in turn may impact an athlete’s ability to recover from their training stress.  (Pickering & Kiely, 2017).

So, What Should I Do?

To understand what steps to take one must first understand which alleles they carry.  This can be done by searching your 23&Me genome report for “rs762551”.  If you see A/A you are fast, A/C would be moderate, and C/C would be a slow metabolizer of caffeine and certain medications.  Once you know this you can adjust your daily caffeine intake based on your genes to support long term cardiovascular health.  In addition, you will know if caffeine consumed prior to endurance training will benefit you or actually possibly decrease your performance.

If you are a slow caffeine metabolizer you would want to limit daily caffeine intake whether it is from coffee, cold brew, lattes, matcha, yerba matte, teas, pre-workout supplements, sodas, and caffeinated sports foods such as gels, GU’s and chews.  A slow metabolizer will want to check labels for added caffeine to keep the daily intake at a healthy dose by staying under the suggested max of ~200mg/d.

I do think more research needs to be done even differentiating between men and women.  In a summary by Pickering and Kiely (see table below), it appears many of the studies that involved women and men rather than just men seemed to result in no significant difference on gene carriers and caffeine effects on performance, granted many of the studies had a small sample size it makes me wonder if something is different in the way women are metabolizing caffeine and skewing the data (Pickering & Kiely, 2017).  I would love to see a similar study done only on female athletes and even better if they took the phase of their menstrual cycle into consideration.  This research has definitely piqued my interest and I immediately searched my 23&Me report only to learn I’m a moderate metabolizer.

Will you be searching your genome to learn more about your nutrition-gene interactions and improve your Ready State? 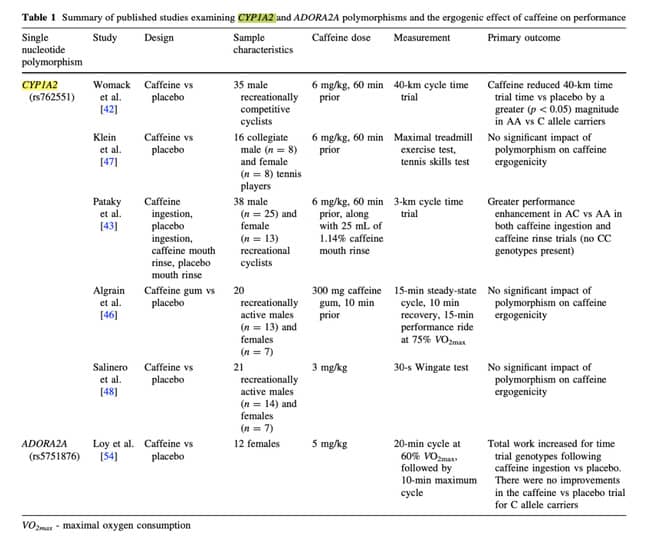 One thought on “Genetics, Caffeine Metabolism and Athletic Performance”