Kingsley Yew is a Physical Therapist, movement optimist & founder of Evolve to Perform on Long Island, NY. He loves to nerd on movement, mobility, training & anything Star Wars & Marvel-related but denies ever dressing up in costume.

For those of you that have low arches, weak feet or any other reason you’ve been told you need orthotics, it makes total sense that adding support would solve all of your problems.

But does it come at a price?

As a father to a teenager and 2 pre-teens, I’m familiar with playing the heel. So I’m going to try my best to inform you about my stance on orthotics, who it’s good for, what it’s good for and what are some of the steps that you can take in the right direction to free yourself from a life of dependency from something that is seemingly unnatural. After all, you’re here at The Ready State and you know that we all can do better. So let’s show you better.

What is an Orthotic?

To clarify, my definition of an orthotic does not have to be an expensive pair of custom made insoles. My definition of orthotic also includes inserts that you can buy to alleviate foot pain or shoes that are meant to control the motion of the foot.

The human foot is a beautifully sculpted piece of human engineering. It consists of bones, joints, and arches that are designed to shield us from impact, absorb it and return it in dynamic ways that allow our species the ability to outlast any land-based mammal on the planet in terms of sheer efficiency and versatility. Our feet are nimble enough to balance us on ice, yet strong enough to walk on hot coals and resilient enough to carry us and walk, even after running an ultramarathon.

And yet, with these innate capabilities, there is a school of thought that we have to supplement the foot with extra lifelong protection, support, or stability. 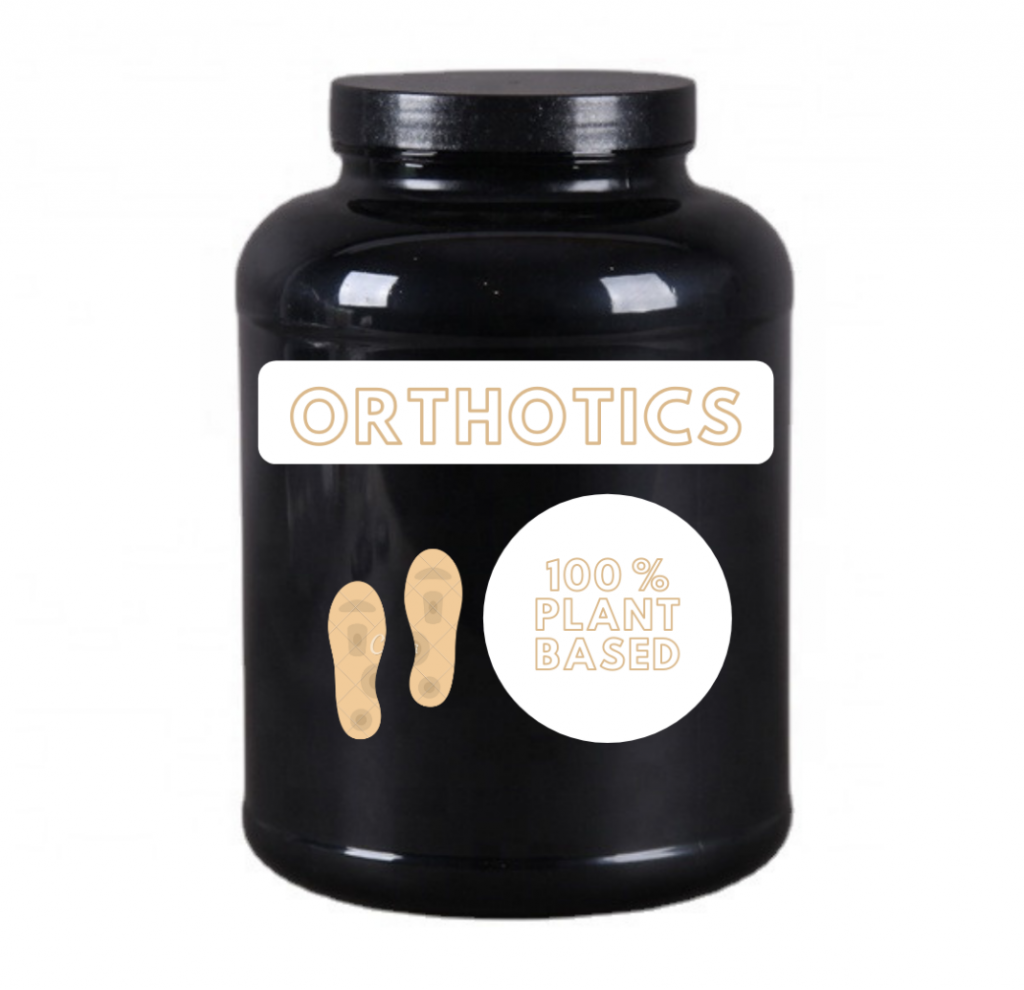 Are there certain conditions that are appropriate for orthotics? Of course. Without saying anything in totality, there are conditions like Charcot Foot that require external support due to involved disruptions of neural signals that impair overall sensation. Episodes of acute pain that affect how you walk and bear weight are also a time when orthotics would be fitting. But prolonged or permanent usage of orthotics for common reasons such as flat feet, plantar fasciitis, hallux rigidus, heel spurs, shin splints, posterior tibialis tendonitis, and heel cord injuries are not. Mainly because of the effect that orthotics play on the intrinsic muscles of the foot. 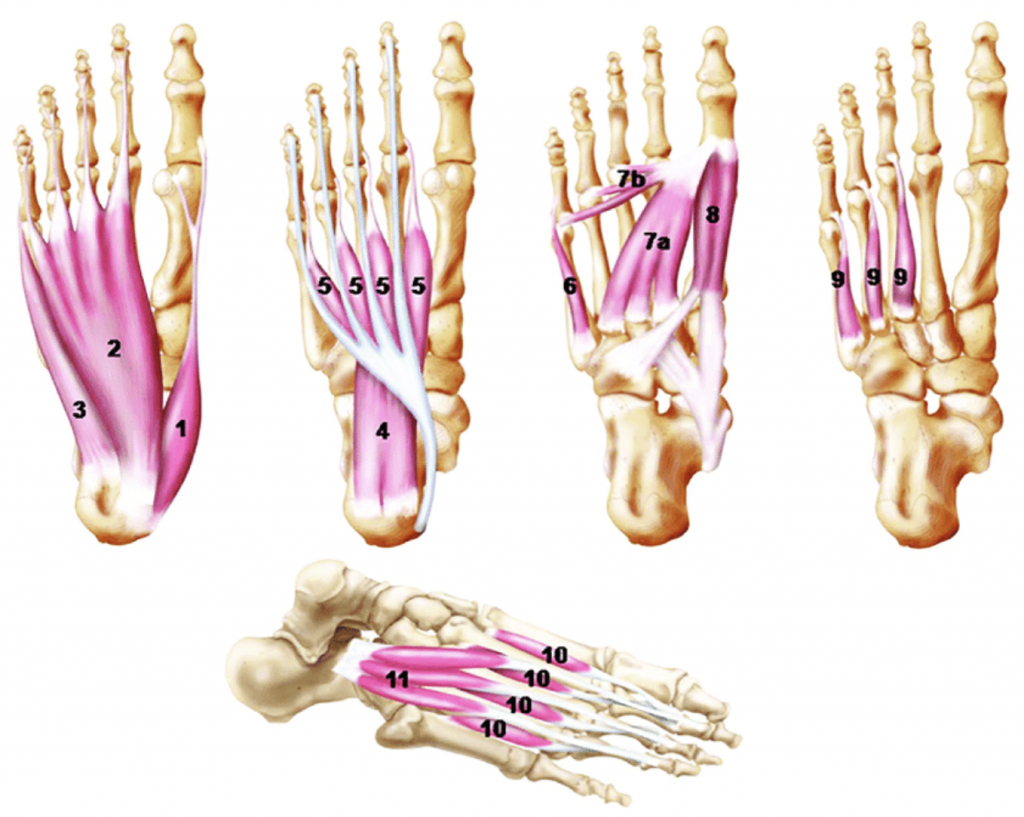 There are 4 layers of muscles that make up the intrinsic muscles of the foot. When working efficiently and together in concert, they congregate to maximize how well all 26 bones of the foot meet (AKA – joint congruency of all the foot joints) to make up the dome of the foot. It’s like putting the pieces of a well-fitting 3-dimensional puzzle together without effort. But more importantly, fully functioning intrinsic muscles help to slow down the arch as it softens to absorb energy and naturally flattens, which is also known as pronation. Pronation is important because it in turn then sets the foot up to stiffen and return energy, which is known as supination.

It’s been found that orthotic use in non-injured people decreases the cross-sectional area of the intrinsic foot muscles in as little as 12 weeks. This is important because, unless you’re looking to lean down that foot to fit into that glass slipper, a loss of muscle size also means a loss in strength & output.

Although it’s been shown that EMG activity of the intrinsic muscles are highest during running, we can’t expect you to start running right away, especially if it’s been a while since you’ve run or you’re fresh out of the acute or sub-acute phases of recovery. So be mindful of your walking.

During walking, intrinsic foot muscle activity is highest during the late stance, which is when the trail leg is behind the body and the big toe is flexed upward as the heel lifts. This is a key to un-tapping the hidden potential of the foot because it enables you to use the mechanical leverage from a phenomenon of the foot called the Windlass Mechanism. It also happens to be one of the keystone movements that are required in our movement archetypes. If you find that you have some difficulty with the positions, there are a plethora of ways to improve your movement capacity in the TRS App.

Steps in the Right Direction

Going after the lowest hanging fruit first, one exercise that you can start with to develop communication with the intrinsic muscles is the Short Foot exercise. This exercise has been found to be more effective than Towel Curl exercises to reconnect with the intrinsic foot muscles.

As mentioned earlier. Although orthotics in the acute phase of an injury helps to bridge the gap by reducing pain and compensations and mindful walking can help restore the natural dynamics of the foot, it’s time to start taking yourself through the orthotic elimination diet. 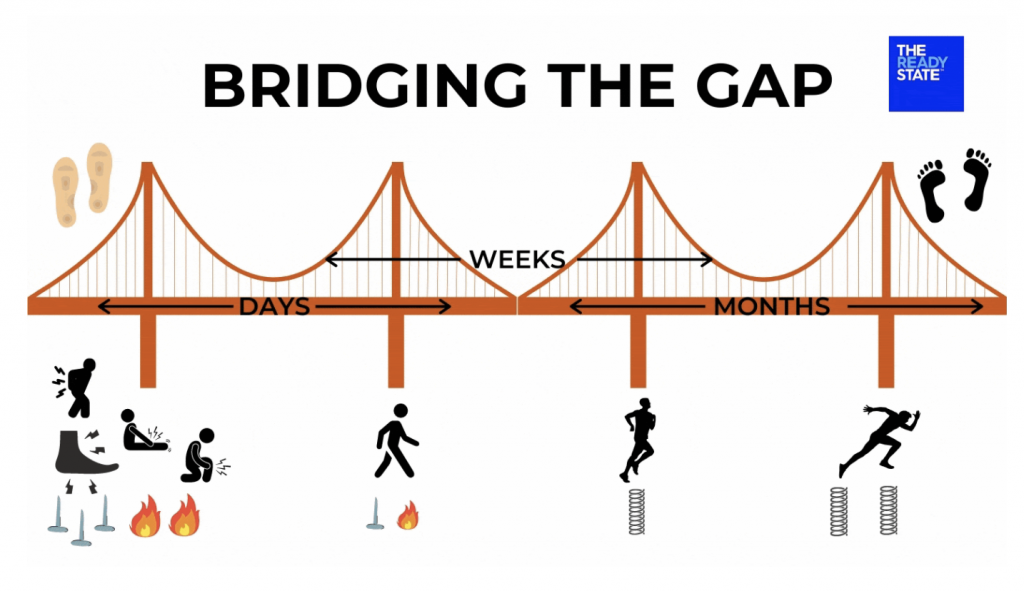 Some of my favorite minimalist shoes are Vivobarefoot, Vibram Fivefingers & Xero.

To step it up a notch, adding more demanding forces and athletic movements to load the foot like the Sled Push or Drag and Active Foot exercises are solid options if you’re looking to get back to more dynamic activities such as running and return to sport.

“You’re Only as Old as Your Feet.”

If I can’t convince you to ditch long-term use of orthotics because it will likely lessen the chances you will suffer from an injury again and boost your genetic expression as an athlete, then another reason for investing the time to strengthen your feet is because it benefits your balance as you age.

According to the National Council on Aging, falls play a major role in injuries and the loss of independence in older Americans. Toe strength is an independent indicator of falls in the elderly.

So hopefully, I’ve been able to provide some guidance about orthotics, why it’s important to develop independence over the long-term and some actions that you can begin to take to reclaim foot function.

I don’t know about you, but this thing they call peaking … it hasn’t even happened yet. Don’t give up a soul for a sole & Stay Ready!

4 thoughts on “Orthotics: Am I Giving Up a Soul For a Sole?”